Jani Lane was an American singer-songwriter and musician best known as the lead vocalist and main songwriter for the glam metal band Warrant. Warrant have sold over ten million records and has released hits like the #2 song “Heaven.” He left the group in 2004 to pursue a full-time solo career. Born John Kennedy Oswald in Akron, Ohio, USA, to Eileen and Robert Oswald, John grew up with four siblings; Vicki, Micki, Marci, and Eric. He was married to Kimberly Nash, Rowanne Brewer and Bobbie Brown. He died on August 10, 2011 in Woodland Hills, California, USA. 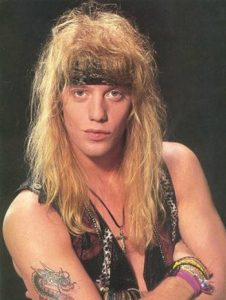 Jani Lane Facts:
*He was of Irish descent.
*He was the lead vocalist of the group Warrant.
*His debut solo album, “Back Down to One”, was released in 2002.
*He was a mail man at one time.