Jason Aldean is an American country music singer. He is best known for the hits “Why,” “She’s Country,” “The Truth,” “Dirt Road Anthem,” “Lights Come On” and “Big Green Tractor.” He released his debut album, Jason Aldean, in 2005, followed by his second album, Relentless in 2007. Born Jason Aldine Williams on February 28, 1977 in Macon, Georgia, USA to Barry and Debbie Aldean, his parents divorced when he was three. He was raised by his mother, in Macon, where he went to high school at Windsor Academy. He has one sister, and two step-brothers. He started singing at the age of 14. He is married to musician Brittany Kerr. He was previously married to Jessica Ussery. He has two daughters named Keeley and Kendyl, and a son named Memphis Aldean. 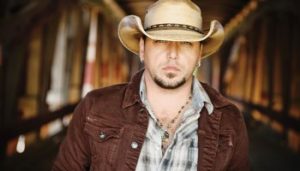 Jason Aldean Facts:
*He started singing when he was 14 years old.
*He has been signed to Broken Bow Records since 2005.
*He has one double platinum album, and he has recorded seven albums overall.
*Nine of his singles have reached #1 position on the Hot Country Songs charts.
*He was named Male singer of the Year at the 2015 ACM Awards.
*Visit his official website: www.asonaldean.com
*Follow him on Twitter, Myspace, YouTube, Facebook, Google+ and Instagram.