Jeff Bezoz is an American technology and retail entrepreneur, investor, and philanthropist. He is the founder, chairman, president, and Chief Executive Officer (CEO) of Amazon.com, the world’s largest online shopping retailer. He founded Amazon in late 1994 on a cross-country road trip from New York City to Seattle. In 2013, he purchased The Washington Post for $250 million in cash. He is the richest man in the world as of 2018 with a net worth of almost US$ 130 billion. Born Jeffrey Preston Jorgensen on January 12, 1964 in Albuquerque, New Mexico, USA, to Jacklyn Gise and Ted Jorgensen, he was raised in Houston, Texas. He was later adopted by his stepfather Miguel Bezos. He is a Princeton University graduate with degrees in electrical engineering and computer science. He worked on Wall Street in a variety of related fields from 1986 until 1994. He married novelist MacKenzie Bezos in 1993. They have four children. 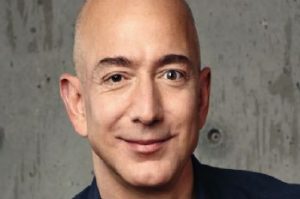 Jeff Bezos Facts:
*He was born in Albuquerque, New Mexico and grew up in Houston, Texas.
*He is widely considered to be an e-commerce pioneer and consumerism revolutionary.
*He was named Time Magazine’s Person of the Year in 1999.
*He owns the Washington Post.
*Follow him on Twitter and Instagram.