Jeffree Star is an American makeup artist, fashion designer, YouTuber, model, singer-songwriter, DJ, entrepreneur, and Internet celebrity. He is the founder and owner of Jeffree Star Cosmetics. Star released his album Beauty Killer in 2009. He was featured in the second version of Kesha’s music video for her single “Take It Off” in 2010. Born Jeffrey Lynn Steininger Jr. on November 15, 1985 in Los Angeles County, California, to parents Laurie and Jeffrey L. Steininger, he grew up in Orange County, California. He frequently used MySpace to promote his both his music as well as fashion design career. In November 2014, he founded the company Jeffree Star Cosmetics, which he promoted on his YouTube channel. From 2015 to December 2019, Star was in a relationship with popular Instagram star Nathan Schwandt. 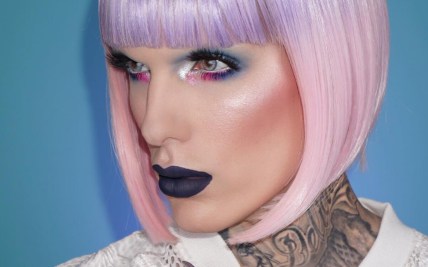 Jeffree Star Facts:
*He was born on November 15, 1985 in Los Angeles County, California, USA.
*His father died when he was just six, and he was raised by his mother.
*He has more than 17.3 million subscribers to his YouTube channel.
*He has his own makeup line, Jeffree Star Cosmetics, which he founded in November 2014.
*Fifth-highest-paid YouTuber. (December 2018)
*He is gay.
*Visit his official website: www.jeffreestarcosmetics.com
*Follow him on Twitter, YouTube, Facebook and Instagram.