Jenny McCarthy is an American actress, model, television personality, comedian, author and anti-vaccine activist who began her career as a Playboy model in 1993. She is best known for hosting the MTV game show Singled Out and The Jenny McCarthy Show, and had a regular role on the short lived TV series Jenny (1997). In 2019, McCarthy became a judge on the FOX musical competition show The Masked Singer. She has also written multiple best-selling books dealing with the topic of autism. Born Jennifer Ann McCarthy on November 1, 1972 in Evergreen Park, Illinois, to parents Linda and Dan McCarthy, she was raised in West Elsdon, Chicago. In 1990, McCarthy graduated from Mother McAuley Liberal Arts High School in Chicago, and went to Southern Illinois University to study nursing and psychology. She got her career start in 1993 as a n*de model for Playboy magazine and was later named their Playmate of the Year. She married John Asher in 1999, and the couple had a son named Evan in 2002 before getting divorced in 2005. In August 2014, she married actor Donnie Wahlberg. 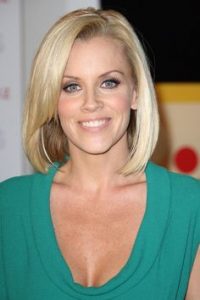 Jenny McCarthy Facts:
*She was born on November 1, 1972 in Evergreen Park, Illinois, USA.
*She is of Irish, German, and Polish descent.
*She has three sisters named Joanne, Amy and Lynette.
*She served as a cheerleader in her high school.
*She dropped out of nursing school to become an actress.
*She began her career as a Playboy model in 1993.
*She was named the 1994 Playboy Playmate of the Year.
*People Magazine named her one of the top 50 Most Beautiful People in the World in 1996.
*She had her breast implants removed in 1998.
*She is friends with Chelsea Handler and Debbie Matenopoulos.
*Her childhood idols were Olivia Newton-John and Lynda Carter.
*From 2006 to April 2010, she was in a relationship with Jim Carrey.
*Her attorney is Leigh Brecheen.
*Visit her official website: www.jennymccarthy.com
*Follow her on Twitter, Facebook and Instagram.