Jennylyn Mercado is a Filipino actress and singer. She achieved fame as the winner of the first season of the reality talent competition StarStruck. She is best known for her roles in the films Rosario (2010), English Only, Please (2014), Walang Forever (2015), The Prenup (2015), and Just the 3 of Us (2016). She is also known for the television work on series such as My Faithful Husband, Rhodora X, Indio, Hindi Ka Na Mag-iisa, Futbolilits, Mars Ravelo’s Captain Barbell, Sine Novela: Gumapang Ka Sa Lusak, Super Twins, I Luv NY, Encantadia, and Forever In My Heart. As a singer, she has released three albums from GMA Records and Viva Records which included several popular singles such as “Sa Aking Panaginip”, “Maybe This Time”, “Moments Of Love” collaboration with Janno Gibbs and “Kahit Sandali”. Born Jennylyn Vergara Mercado on May 15, 1987 in Las Piñas, Philippines, to a mother who was a duty-free store beauty consultant, Jennylyn was raised by her aunt/uncle and considers them as their parents. She was in a relationship with fellow actor Patrick Garcia in 2000’s and they had a son together in 2008. 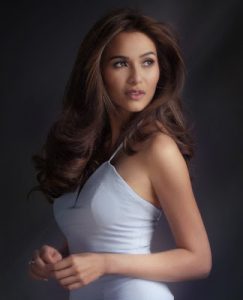 Jennylyn Mercado Education:
She spent her senior high school year at the Augustinian Abbey in nearby Las Piñas.

Jennylyn Mercado Facts:
*She was born on May 15, 1987 in Las Piñas, Philippines.
*She was raised in Parañaque, Metro Manila.
*She won the first season of the reality talent competition StarStruck.
*She released her first album, Living the Dream, in 2004.
*She received the Best Dressed Female Celebrity Award at the 2012 Metro Manila Film Festival.
*She works with the Philippine women’s organization GABRIELA.
*Visit her official website: www.jennylynnation.net
*Follow her on Twitter, Facebook and Instagram.