Jesse Eisenberg is an American actor most famous for his portrayal of Mark Zuckerberg in the 2010’s The Social Network, for which he received BAFTA, Golden Globe, and Academy Award nomination. His first lead role was in the 2002 film Rodger Dodger. His films credit include Now You See Me, Adventureland, 30 Minutes or Less, The Squid and the Whale, Zombieland and Batman v Superman: Dawn of Justice. Jesse was born as Jesse Adam Eisenberg in the Queens borough of New York City, to Barry and Amy Eisenberg. 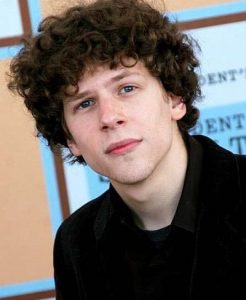 Jesse Eisenberg Education:
He was educated at The New School in New York City’s Greenwich Village.

Jesse Eisenberg Facts:
*He began playing the drums at the age of 8.
*He is good friends with Justin Bartha and Andrew Garfield.
*His favorite film is 1989’s Crimes and Misdemeanors.
*He received his very first kiss from Jennifer Beals in Roger Dodger (2002).