Jill Halfpenny is an English actress born in Newcastle, England. She is best known by the public for her roles as Kate on EastEnders, Rebecca Hopkins in Coronation Street, Diane Manning in In The Club and Izzie Redpath in Waterloo Road. She has also had many minor roles in other well-known TV shows, such as The Catherine Tate Show, The Bill, and Shameless. For her role as Izzie Redpath on Waterloo Road, she won a Best Actress TV Quick Award in 2007. Born on 15 July, 1975, in Newcastle, to Maureen and Colin Halfpenny, Jill Halfpenny is the youngest of three children. She studied at the Webber Douglas Academy of Dramatic art. She married Craig Conway in 2007, and the couple had a son named Harvey in 2008 before getting divorced in 2010. 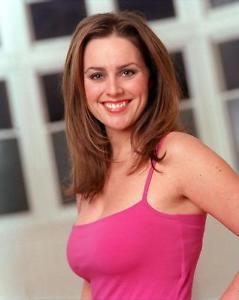 Jill Halfpenny Facts:
*She is the youngest of three children.
*Her father died when she was only 4.
*She started her acting career at age 14, appearing in the BBC television children’s drama series Byker Grove.
*She won the second series of Strictly Come Dancing.
*Her hobbies include roller-skating, ice-skating, dancing, fencing and enjoys traveling.
*She is an ambassador for leading children’s charity Kidscape.
*Follow her on Twitter.