Jo-Wilfried Tsonga is a French professional tennis player. He achieved his career’s best ranking on February 27, 2012, which was #5. He reached the finals of the 2008 Australian Open where he was defeated by Novak Djokovic. He was born to handball player Didier Tsonga and Évelyne, on April 17, 1985 in Le Mans, France. He is of Congolese descent on his father’s side, and of French descent on his mother’s side. He has a sister Sasha and brother Enzo. He has been in a relationship with Noura El Shwekh since 2014. 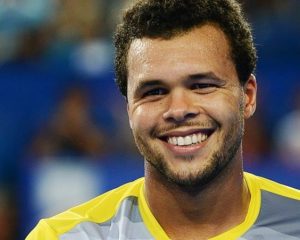 Jo-Wilfried Tsonga Facts:
*He belongs to Congolese and French descent.
*His younger brother, Enzo, is a basketball player.
*He was named as the 2008 Most Improved Player of the Year.
*He was voted the 2007 ATP Newcomer of the Year.
*He is nicknamed Ali because of him having a similar face to the former American boxer Muhammad Ali.
*Follow him on Twitter, Facebook and Instagram.