Joely Fisher is an American actress and singer. She is best known for television roles as Joy Stark on ‘Til Death, Paige Clark on Ellen and Zoe Busiek on Wild Card. Her other television roles include Grosse Pointe, Normal, Ohio, Danny, Baby Bob, Desperate Housewives and Last Man Standing. She has also appeared in the films The Mask, Mixed Nuts, You, Family Plan and Killing Winston Jones. Born on October 29, 1967 in Burbank, California, to singer Eddie Fisher and actress Connie Stevens, she is the older sister of actress Tricia Leigh Fisher and half-sister of actress Carrie Fisher and TV and filmmaker Todd Fisher. Her parents divorced when she was only two years old, and was raised by her mother. After graduating from from Beverly Hills High School, she attended Emerson College in Boston and studied at the University of Paris for one semester. Fisher is married to cinematographer Christopher Duddy, with whom she has three children. 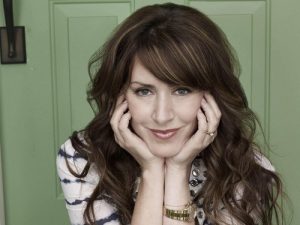 Joely Fisher Facts:
*She was born on October 29, 1967 in Burbank, California.
*She was two years old when her parents divorced.
*She attended Emerson College and the University of Paris.
*She is good friends with Ellen DeGeneres.
*Follow her on Twitter, Facebook and Instagram.