Kylie Minogue is an Australian singer, songwriter and actress who became recognized for her role in the Australian television soap opera Neighbours. Minogue signed to record label PWL in 1987 and released her debut studio album, Kylie, in 1988, followed by her second album, Enjoy Yourself in 1989. She released her latest album, Golden, on 6 April 2018. Her hit singles include, “Can’t Get You Out of My Head”, “The Loco-Motion”, “Slow”, “All The Lovers”, “Hand on Your Heart”, “Time Bomb”, “Spinning Around”, “Love At First Sight”, “Better the Devil You Know”, “Especially for You”, “2 Hearts”, “I Should Be So Lucky”, and “Confide in Me”. She has sold more than 80 million records worldwide. She has also appeared in films such as San Andreas, Jack & Diane, Holy Motors and Moulin Rouge. Born Kylie Ann Minogue on May 28, 1968 in Melbourne, Victoria, Australia to Carol Jones and Ronald Charles Minogue, she grew up in Surrey Hills, Melbourne. She is the older sister of Dannii Minogue and Brendan Minogue. She was in a relationship with model Andrés Velencoso from 2008 to 2013. 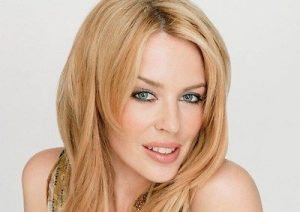 Kylie Minogue Facts:
*She was born on 28 May 1968 in Melbourne, Australia.
*She is of Irish, Welsh, and English descent.
*She started her professional career as an actress.
*She is considered one of the most recognisable celebrities and sex symbols.
*She has dual citizenship of British and Australian.
*She won a Mo Award for Australian Entertainer of the Year.
*She has her own lingerie brand named “Love Kylie”.
*She was once engaged to Joshua Sasse.
*Visit her official website: www.kylie.com
*Follow her on Twitter, YouTube, Myspace, Facebook and Instagram.