John Cena was born John Felix Anthony Cena on April 23, 1977 in West Newbury, Massachusetts, the son of Carol Cena and John Cena Sr. He is an American professional wrestler, rapper and actor signed to WWE. He is the public face of WWE, and has served as its franchise player since 2005. His debut match in the WWE was against Kurt Angle on WWE Smackdown! on the 27th of June, 2002 which ended up with him losing. He belongs to Italian, French-Canadian, and English descent. He has four brothers; Matt Cena, Dan Cena, Sean Cena and Steve Cena. 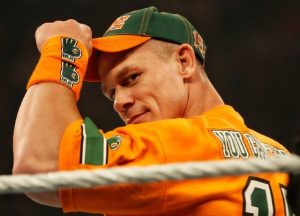 John Cena Facts:
*His father’s name is also John Cena.
*His debut match in the WWE was against Kurt Angle on WWE Smackdown! (1999).
*He writes his own raps.
*He is a huge fan of cartoons.
*He speaks Mandarin Chinese.
*He is a fan of Japanese anime.
*He is left-handed.
*Follow him on Twitter, Facebook, Myspace and Instagram.