John McCain was an American politician who was a Vietnam War veteran and served as the senior United States Senator from Arizona. He was the Republican candidate for president in the 2008 United States election, which he lost to Barack Obama. In August 1999, he published his memoir “Faith of My Fathers” with Mark Salter, which was made into a TV movie. Born John Sidney McCain III on August 29, 1936 in Canal Zone, Panama, to John S. McCain Jr. and Roberta McCain, his father and grandfather were both four-star U.S. Navy admirals. He had a younger brother, Joe McCain and an elder sister, Sandy McCain. McCain graduated from the Naval Academy at Annapolis in 1958. He married Cindy McCain in 1980. He was previously married to Carol McCain from 1965 to 1980. He has three sons named Douglas, James and John and three daughters named Meghan, Bridget, and Sidney. McCain died on August 25, 2018 in Phoenix, Arizona, USA. 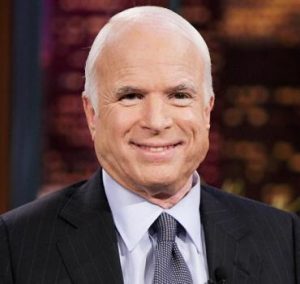 John McCain Facts:
*He was born on August 29, 1936 in Canal Zone, Panama.
*He became a lightweight boxer while attending the United States Naval Academy.
*He was the member of the United States House of Representatives from Arizona from 1983 to 1987.
*He was shot down and captured by North Vietnamese forces during the Vietnam War, and held as a POW for more than five years.
*He retired from the Navy as a Captain in 1981.
*In 2002, he co-wrote the McCain–Feingold Act.
*In 1979, he quit his two pack a day cigarette habit.
*One of his favorite movies is 1957’s Paths of Glory.