English actor and musician who has been nominated twice for the BAFTA Award for Best Actor, and is a Laurence Olivier Award nominee for best actor. He is best known for his portrayal of Detective Inspector Sam Tyler in the 2006 BBC series Life on Mars, and for his role as The Master in the long-running BBC series Doctor Who. He is also known for his roles in television, such as State of Play, The Lakes, Crime and Punishment, Exile, Prey, and Cracker, and in the films Wonderland, Everyday, Boston Kickout, Human Traffic and 24 Hour Party People. Aside from his career as an actor, Simm was a founding member, guitarist and songwriter with the rock band Magic Alex. Born John Ronald Simm on July 10, 1970 in Leeds, United Kingdom, he is the eldest of three children. Simm grew up in Nelson, Lancashire, and attended Edge End High School, Nelson, Lancashire, followed by Blackpool Drama College and the Drama Centre, London. He married actress Kate Magowar in April 2004 in the Forest of Dean. Together they have a son named Ryan and a daughter named Molly. 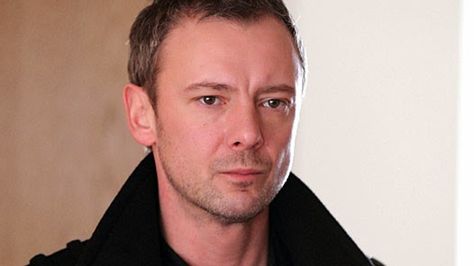 John Simm Facts:
*He was born on July 10, 1970 in Leeds, United Kingdom.
*Simm”s father, Ronald, was a musician; and from the age of 12, Simm sang and played guitar with his father on stage in the working men’s clubs.
*His acting teacher was Reuven Adiv.
*He received the best actor award at the Valencia Film Festival for his film debut in Boston Kickout (1995).
*He is a supporter of English Fooltball Club, Manchester United.
*Visit his official website: www.JohnSimmSociety.com
*Follow him on Twitter, Facebook and Instagram.