Joshua McGuire is a British actor of television, film and stage. He is best known for his role as Angus in the Channel 4/Netflix comedy series Lovesick. He also starred as The Old Vic in the critically acclaimed production of Rosencrantz and Guildenstern Are Dead at The Old Vic, and played Briar Cudgeon in Artemis Fowl. McGuire’s other notable appearances include: “The Hour”, “You, Me & Them”, “Love, Nina”, and I’m Not Running. Born in 1987 in England, United Kingdom, McGuire grew up in the town of Warwick in Warwickshire. He attended Warwick School and graduated with a BA (Hons) in Acting from Royal Academy of Dramatic Art, in Bloomsbury in Central London. 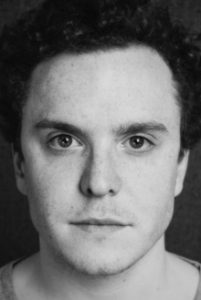 Joshua McGuire Facts:
*He was born in 1987 in England, United Kingdom.
*He studied acting at Royal Academy of Dramatic Art (RADA).
*In 2014, he began playing Angus in the Channel 4/Netflix comedy series Lovesick.