Juan Fernando Quintero is a Colombian professional football player who plays for Chinese Super League club Shenzen and the Colombia national team as an attacking midfielder. He began playing football at age eleven with Envigado Academy. From 2012–2013, Quintero played for Pescara before joining Porto in 2013. A former Colombian youth international, Quintero became a member of the Colombian national team in 2012. He entered his first World Cup competition with Colombia in 2014. He has been mentioned among the more coveted young players in European football by The Times of London. 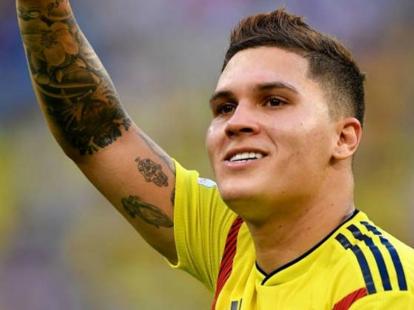 Juan Fernando Quintero Facts:
*He was born on January 18, 1993 in Medellín, Colombia.
*His parents are Lina and Jaime Enrique Quintero Cano.
*He began his youth career playing for the Envigado club in 2004, and debuted professionally in 2009 with Envigado.
*From 2013–2019, he played for Porto.
*He signed with Shenzhen in 2021.
*His overall size and style of play as well as his left-foot has led him to be compared to Lionel Messi.
*Follow him on Twitter, Facebook and Instagram.