Judy Sheindlin is an American lawyer, former judge, television personality and author, famous for her own successful Daytime Emmy Award–winning reality courtroom series, Judge Judy, which earned her $47 million in 2013. She used to work for a cosmetics firm as a corporate lawyer before appearing on television. She became recognized for her tough love style of judging, and spent twenty-four years as a Manhattan County court judge. Judy was born to Ethel and Murray Blum, on October 21, 1942 in Brooklyn, New York, USA as Judith Susan Blum. She has four siblings. She earned her Juris Doctor degree from New York Law School in 1965. 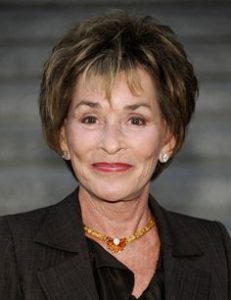 Judy Sheindlin Facts:
*She is the daughter of Ethel and Murray Blum.
*She described her mother as “a meat and potatoes kind of gal” and her father as “the greatest thing since sliced bread”.
*Her husband, Jerry Sheindlin, is also a retired judge and author.
*She was placed number 13 by Forbes.com’s list of the Richest 20 Women in Entertainment.
*She is the best-selling author of four books.
*Follow her on Twitter and Facebook.