Julia Elizabeth Wells, widely known as Julie Andrews, is an English film and stage actress, singer, author, dancer and theatre director best known for her roles in “The Sound of Music” and “Mary Poppins”. Andrews came to Broadway in 1954 with “The Boy Friend”, and became a bona fide star two years later in 1956, in the role of Eliza Doolittle in the unprecedented hit “My Fair Lady”. She won an Academy Award for best actress for her portrayal of the title character in the movie “Mary Poppins”. She was born Julia Elizabeth Wells on October 1, 1935 in Walton-on-Thames, Surrey, England. She was married to Blake Edwards (m. 1969–2010) and Tony Walton (m. 1959–1967). 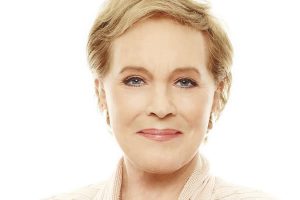 Julie Andrews Facts:
*In 2000, she was made a Dame by Queen Elizabeth II for services to the performing arts.
*She has a rose named after her.
*She has perfect pitch.
*She was a recipient of the Kennedy Center Honors in 2001.
*Her stepfather was an alcoholic.