Julie Henderson is an American fashion model who appeared in the 2007, 2008, 2009, 2010, 2011, and 2012 Sports Illustrated Swimsuit Issue. She has advertised for many brands such as Benetton, Blauer, Blue USA, Hardee’s (Restaurant chain), Pantene, and Gant. Born Julie Patrice Henderson on March 5, 1986 in Houston, Texas, she graduated from Katy High School and attended Barbizon Modeling and Acting School of Texas. She was scouted when she was 13 at the Barbizon Modeling and Acting School of Texas. Henderson made her first appearance in the Sports Illustrated Swimsuit Issue in 2007. She has dated Russell Simmons (2009), Aaron Rodgers (2009), and Alejandro Santo Domingo (2010). 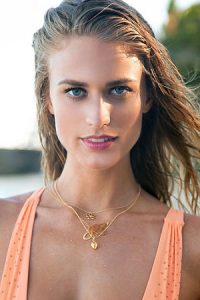 Julie Henderson Facts:
*She was born on March 5, 1986 in Houston, Texas, USA.
*At 13, she was discovered at the Barbizon Modeling and Acting School of Texas.
*She appeared as a cowgirl in a Jack In The Box commercia in 2011.
*She appeared on the cover of Plaza Kvinna magazine for its Sweden’s August 2012 issue.
*She is represented by the agencies Models 1, Modelwerk, New York Model Management, and Ford Models Europe – Paris.
*Follow her on Twitter, Facebook and Instagram.