Julie Stewart-Binks is a Canadian journalist and television presenter who worked for Barstool Sports, ESPN, and Fox Sports. She’s the first female reporter to call two straight MLS Cups with two different networks (ESPN and FOX). Born on April 30, 1987 in Toronto, Canada, to parents Georgie Binks and Will Stewart, she has one younger brother named Ian. She attended Havergal College, and graduated from Queen’s University in Kingston, Ontario, with a couple of undergraduate degrees. She also graduated from City, University of London with a master’s degree in international broadcast journalism. She began her journalism career as a program assistant at the Canadian Broadcasting Corporation (CBC) in 2010. 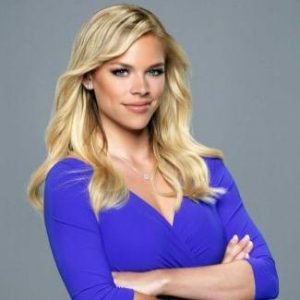 Julie Stewart-Binks Facts:
*She was born on April 30, 1987 in Toronto, Canada.
*She was hired as a program assistant at the Canadian Broadcasting Corporation in 2010.
*She was a reporter for the National Hockey League team Toronto Maple Leafs.
*She was hired to the anchor desk by Fox Soccer Channel’s flagship program in Winnipeg, Manitoba in July 2011.
*She also worked as a reporter for CTV Television Network in Regina, Saskatchewan.
*She was hired by Fox Sports as a news update anchor role with Fox Sports 1 at the new network’s studios in LA, California in June 2013.
*She became Fox’s regular sideline reporter for their newly acquired MLS matches in 2015.
*She was hired by ESPN as a sideline reporter for MLS and U.S. Men’s and Women’s National Team games in December 2016.
*She joined Barstool Sports as the host of Barstool Breakfast on Sirius XM 85 in 2017.
*She left Barstool Sports Radio in May 2018.
*Follow her on Twitter, Facebook and Instagram.