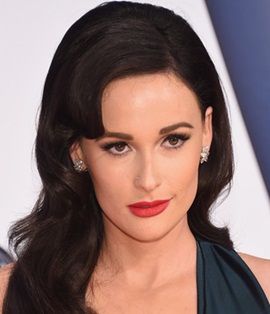 Born Kacey Lee Musgraves on August 21, 1988 in Golden, Texas, to parents Karen and Craig Musgraves, she has a younger sister named Kelly. Musgraves graduated in 2006 from Mineola High School, and moved to Austin, Texas, at the age of 18. In October 2017, Musgraves married her boyfriend of two years Ruston Kelly following a 9-month-long engagement. They split in 2020.

Kacey Musgraves Facts:
*She was born on August 21, 1988 in Golden, Texas, USA.
*She began songwriting at the age of eight, when she wrote a song called “Notice Me” for her elementary school graduation.
*She independently released three albums before appearing on the USA Network’s singing competition Nashville Star in 2007.
*She was discovered professionally in 2008 while living in Austin by producer Monte Robison for his independent record label, Triple Pop.
*Her debut full-length album Same Trailer Different Park (2013), debuted at number one on the Billboard Top Country Albums chart and number two on the Billboard 200.
*She was ranked #70 on Maxim’s “Hot 100” of 2014 list.
*Visit her official website: www.kaceymusgraves.com
*Follow her on Twitter, YouTube, Facebook and Instagram.