Karen Gillan is a British actress, screenwriter, director and former model. She is best known for playing the role of Amelia Pond in the long-running British science fiction series, Doctor Who (2010–2013), for which, she won a National Television Award in 2012. She played Eliza Dooley in the American romantic comedy series, Selfie. She has also played prominent roles in the films Guardians of the Galaxy, Guardians of the Galaxy Vol. 2, Not Another Happy Ending, and Jumanji: Welcome to the Jungle. Before she started acting on television, she worked as a model, premiering at London’s Fashion Week in 2007. Born Karen Sheila Gillan on November 28, 1987 in Inverness, Scotland, she is an only child of John and Marie Gillan. She began acting when she was very young. She studied at Italia Conti academy in London. 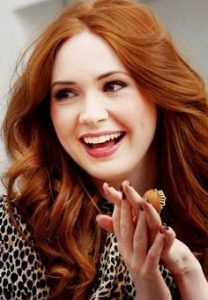 Karen Gillan Facts:
*She was born and raised in Inverness, Scotland.
*She learned to play the piano when she was seven years old.
*She moved to London at age 18 to study at drama school.
*She is a big fan of the situation comedy Community (2009).
*She is good friends with Katee Sackhoff.
*Follow her on Twitter and Instagram.