Karla Crome is a British actress. She is known for the television work on series such as E4’s Misfits, Hit & Miss, Monroe, Murder, Lightfields, Prisoners’ Wives, The Level, Carnival Row, The Victim, Under the Dome, and You, Me and the Apocalypse. She played Dorothy Wellesley in the 2018 British biographical romance drama film Vita and Virginia. Born Karla Patsy Crome on June 22, 1988 in Hendon, United Kingdom, to parents Patsy and Nicholas Crome, she has one sister, Sophia. She graduated from London’s Italia Conti Academy of Theatre Arts with a bachelor of arts (hons) acting course. Her first TV movie appearance was in the 2009 Dog Endz. 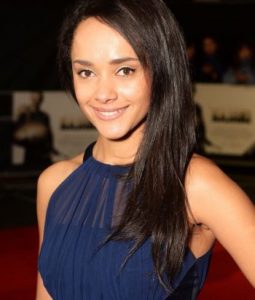 Karla Crome Facts:
*She was born on June 22, 1988 in Hendon, United Kingdom.
*Her parents are Patsy and Nicholas Crome.
*She is of Irish and Afro-Jamaican descent.
*She graduated with a bachelor of arts (hons) acting course from London’s Italia Conti Academy of Theatre Arts.