Karolina Wydra is a Polish-American actress and model. She is best known for television roles as Dominika Petrova on the Fox medical drama series House, vampire Violet Muzurski on the HBO dark fantasy series True Blood and Detective Dianne Kubek on ABC’s short-lived crime drama series Wicked City. She has also appeared in such films as Sugar, Crazy, Stupid, Love, After, and Europa Report. After winning the Elite Lee Jeans Model Look Contest in October 1997, she modeled for brands such as Armani Exchange, Smashbox Cosmetics, Dooney & Bourke, Levi’s Red, Calvin Klein, Charles David, Urban Decay, John Frieda, and Kenneth Cole. She has also graced the covers of the German Elle magazine and Oyster magazine. Born Karolina I. Wydra on March 5, 1981 in Opole, Opolskie, Poland, both of her parents were teachers of mathematics and art. She has one older brother, an accountant, who currently resides in London. In 1992, she and her family relocated to Orange County, California, where her parents set up a successful cleaning business. In 2014, she began dating TreeHugger founder Graham Hill. 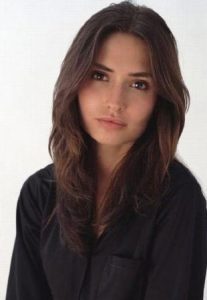 Karolina Wydra Facts:
*She was born on March 5, 1981 in Opole, Opolskie, Poland.
*She won the Elite Lee Jeans Model Look Contest in 1997.
*In 2012, her parents separated, and her mother subsequently moved back to Poland from USA.
*Follow Karolina on Twitter and Instagram.