Karrine Steffans is an American author, most notable for her bestselling Vixen book series. Her first three books, Confessions of a Video Vixen, The Vixen Diaries, and The Vixen Manual: How to Find, Seduce & Keep the Man You Want, have all made The New York Times Best Seller list. As an actress and as a video vixen, Steffans has appeared in more than 20 music videos, many by multiplatinum-selling rap artists. Born on August 24, 1978 in St. Thomas, U.S. Virgin Islands, she is of African-American descent on her father’s side, and of Puerto Rican, Jamaican and Dutch descent on her mother’s side. She was educated at Horizon High School in Scottsdale Arizona. She was married to Darius McCrary from 2009 to 2011 and Damian from 2011 to 2012. Steffans was previously in a relationship with Kool G. Rap from 1994 to 1999. They have a son together. 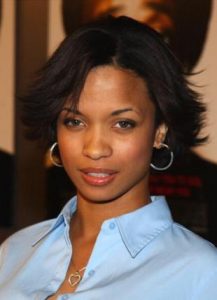 Karrine Steffans Facts:
*She was born on August 24, 1978 in St. Thomas, U.S. Virgin Islands.
*She was raised in poverty and used to work as an exotic dancer when she was in her teens.
*She attended Horizon High School in Scottsdale Arizona.
*She was raped at the age of thirteen, according to her memoirs.
*She appeared on The Oprah Winfrey Show in a segment titled “Smart Women on ‘Stupid Girls’ – Guests discuss the objectification of women”. (April 2006)
*She established her own publishing house named Steffans Publishing in 2008.
*Visit her official website: www.karrineandco.com