Kartik Aaryan is an Indian actor who rose to fame after appearing in 2011’s Pyaar Ka Punchnama. His other movie credits include Pyaar Ka Punchnama 2, Akaash Vani, and Sonu Ke Titu Ki Sweety. For his role in comedy sequel Pyaar Ka Punchnama 2, he won the Stardust Award for Best Actor in a Comic Role. Born Kartik Tiwari on November 22, 1988, in Gwalior, India, to Mala and Muneesh Tiwari, he was raised in Gwalior and Delhi. He has one younger sister. He developed his aspirations to become an actor in tenth grade. He completed his schooling from St. Paul’s School and Kiddy’s School, he later attended DY Patil University. 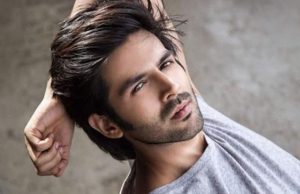 Kartik Aaryan Facts:
*Both of his parents are doctors.
*He spent his growing years in Gwalior and Delhi.
*His Hobbies include Video games, photography, writing, watching football & table tennis.
*Follow him on Twitter, Facebook and Instagram.