Katherine Waterston is a British-born American actress. She is best known for her role as Shasta Fay Hepworth in the 2014 film Inherent Vice, for which she received Satellite Award for Best Supporting Actress nomination. Her other notable film credits include 2007’s Michael Clayton, 2015’s Queen of Earth, 2015’s Steve Jobs, and 2016’s Fantastic Beasts and Where to Find Them. Born Katherine Boyer Waterston in Westminster, London, England, Katherine is the daughter of actor Sam Waterston and model Lynn Louisa Woodruff. Her siblings are actress Elisabeth Waterston, director Graham Waterston and actor James Waterston. 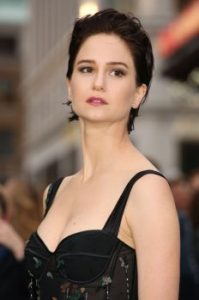 Katherine Waterston Education:
She earned her bachelor’s degree in Fine Arts from Tisch School of the Arts at the New York University.

Katherine Waterston Facts:
*She is the daughter of the refined, Oscar-nominated American actor Sam Waterston
*She was featured on the cover of Town & Country magazine for the November 2015 issue.
*She had her feature film debut in Michael Clayton (2007).
*Before she began acting in movies, she was a stage performer.