Kathleen Robertson is a Canadian actress. She is best known for the television work on series such as Maniac Mansion (1990–1993) and Beverly Hills, 90210 (1994–1997). She played Kitty O’Neill in the Starz original drama series Boss, and had a starring role in the Canadian comedy series, The Business. She is also known for film roles in Torso: The Evelyn Dick Story, Scary Movie 2, Last Exit, Seal Team Six: The Raid on Osama Bin Laden, and The Vatican Tapes. In 2014, she began starring in the American detective anthology drama television series Murder in the First as Hildy Mulligan. Born Kathleen E. Robertson on July 8, 1973 in Hamilton, Ontario, Canada, to Joyce and Gary Robertson, she began taking acting classes from age ten and had roles in local theater productions. She was educated at Sherwood Secondary School and Hillfield Strathallan College. She has been married to Chris Cowles since November 27, 2004. They have a son together. 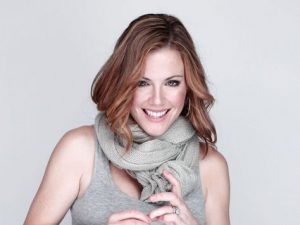 Kathleen Robertson Facts:
*She was born on July 8, 1973 in Hamilton, Canada.
*Before coming to Hollywood, she was a child star in Canada.
*She was considered for the role of “Dr. Claire Saunders” in the TV series Dollhouse.
*She was in a relationship with American filmmaker Gregg Araki from 1997 to 1999.
*Follow her on Twitter.