Kathryn Edwards is an American actress, model and television personality, best known for appearing on the reality television series The Real Housewives of Beverly Hills. Born on October 16, 1964 in Wisconsin, she grew up with her brother and two sisters. Following her high school graduation, Kathryn was signed by Elite Model Management and moved to Paris where she got her start as a successful model appearing several magazine covers. She has been married to Donnie Edwards since June 14, 2002. She was previously married to former NFL legend Marcus Allen. 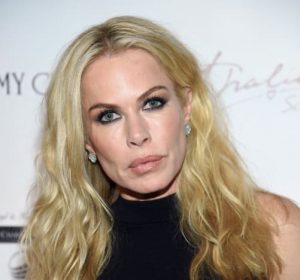 Kathryn Edwards Facts:
*She was born on October 16, 1964 in Wisconsin, USA.
*She has a brother and two sisters.
*She is the ex-wife of former NFL legend Marcus Allen.
*She has appeared in many high-profile shoots, including Nike’s first ‘Just Do It’ campaign.
*She enjoys traveling abroad with her husband.
*Follow her on Twitter.