Alexis Bledel is an American actress and model. She is best known for her portrayal of Rory Gilmore on The WB comedy-drama Gilmore Girls, and for her role as Emily Malek on the Hulu drama series The Handmaid’s Tale. She has also played prominent roles in the films Tuck Everlasting, Sin City, Post Grad, and The Sisterhood of the Traveling Pants film series. In 2014, Bledel was featured on the American remake of Gavin and Stacey, called Us & Them in the role of Stacey. Born Kimberly Alexis Bledel on September 16, 1981 in Houston, Texas, to parents Nanette and Martin Bledel, she has one younger brother, Eric David Bledel. Bledel graduated from Saint Agnes Academy in Houston, Texas and attended New York University’s Tisch School of Arts as a film major for a year. She began dating actor Vincent Kartheiser in mid-2012. She and Kartheiser announced their engagement in March 2013, and were married in California in June 2014. They have a son together. 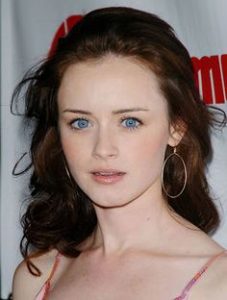 Alexis Bledel Facts:
*She was born on September 16, 1981 in Houston, Texas, USA.
*Her father, Martin Bledel, was born and raised in Argentina.
*Her ancestry includes Danish, Welsh, English, Irish, Scottish, and French.
*She started her modeling career when she was fourteen years old.
*She is a graduate of the Page Parkes Center of modeling and acting.
*She made her television debut in Gilmore Girls (2000).
*She made her feature film debut as Winnie Foster in Tuck Everlasting (2002).
*She is a Democrat and attended the 2012 Democratic National Convention in support of President Obama’s re-election.
*Her first language was Spanish.
*She enjoys watching the World Equestrian Games, especially the freestyle/dancing competitions.
*From 2002 until 2006, Bledel dated fellow former Gilmore Girls co-star Milo Ventimiglia.
*Follow her on Twitter, Facebook and Instagram.