Katie Ledecky is an American competitive swimmer who is widely considered the greatest female swimmer of all time. She has won six Olympic gold medals and 15 world championship gold medals, the most in history for a female swimmer. Ledecky is the world-record holder in the women’s 400-, 800-, and 1500-meter freestyle (long course). She also holds the fastest-ever times in the women’s 500-, 100-, and 1650-yard freestyle events. 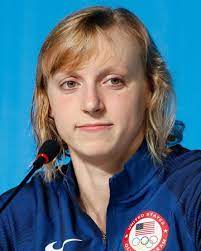 Katie Ledecky Facts:
*Born on March 17, 1997 in Washington, D.C., she was raised in the Maryland suburb of Bethesda, Maryland.
*Her mother is of Irish descent.
*She began swimming at the age of six, having been inspired by her older brother, Michael.
*She graduated from Stone Ridge School of the Sacred Heart in 2015 and went to Stanford University.
*She made her international debut at the 2012 London Olympic Games as a 15-year-old, and unexpectedly won the gold medal in the women’s 800-metre freestyle.
*At the 2016 Olympics in Rio de Janeiro, Ledecky won four gold medals.
*She was a USA Olympic team member in 2012, 2016, and 2020, and holds the record for most individual gold medals (11) and overall gold medals (15) at the World Aquatics Championships.