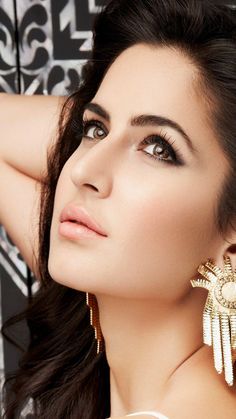 Katrina Kaif Facts:
*She was born on July 16, 1983 in Hong Kong.
*Her father is a British businessman of Kashmiri descent and her mother is an English lawyer and charity worker.
*She has seven siblings: six sisters and one brother.
*Her parents divorced when she was a child, and her father moved to the United States.
*At age 14, she was signed to Models 1 Agency in London.
*She made her film debut in 1999 with the drama Boom, a box office bomb.
*She was named “World’s Sexiest Woman” by FHM 5 times, Eastern Eye’s “Sexiest Asian Woman” 4 times, The Times of India’s “Most Desirable Woman” in 2010 and People’s “Most Beautiful Woman” (India) in 2011.
*Rina Dhaka, Tarun Tahiliani, Rocky S. are her favorite Indian designers.
*Her favorite international designers are Miu Miu, Armani, Prada, Versace.
*Her favorite actors are Robert Pattinson, Ryan Reynolds, Clark Gable, Charlton Heston, Salman Khan, Rishi Kapoor, Brad Pitt, Leonardo DiCaprio, Johnny Depp, Shah Rukh Khan, Hrithik Roshan and Aamir Khan.
*Her favorite actresses are Madhuri Dixit, Kajol, Sridevi, Hema Malini and Madhubala.
*Most searched Bollywood celebrity as per Google’s 2008, 2009, and 2010 data.
*She was voted the sexiest Asian woman in the world by Eastern Eye in the years 2008, 2009, 2010 and 2011.
*She enjoys modeling, acting, dancing, painting, resting, cooking, playing chess, watching movies, going to spas, going to the gym, meeting new people, and getting together with friends.
*She was previously in a relationship with actors Salman Khan and Ranbir Kapoor.
*Follow her on Twitter, Facebook and Instagram.