Keke Palmer is an American actress, singer-songwriter and presenter. She is best known for her starring role in the 2006 film Akeelah and the Bee. She also had a supporting role in the 2006 film Madea’s Family Reunion. Her other film and television appearances include Barbershop 2: Back in Business, Joyful Noise, Winx Club: The Secret of the Lost Kingdom, Ice Age: Continental Drift, Rags, Just Keke, Scream Queens, Berlin Station, and Scream. She has also done voice work in Ice Age: Continental Drift, Winx Club: The Secret of the Lost Kingdom, and Unstable Fables: Tortoise vs. Hare. In September 2007, Keke released her debut album, ‘So Uncool’ under Atlantic Records in USA. The album failed to chart on the US Billboard 200 but did chart at number 85 on the R&B chart. Born as Lauren Keyana Palmer on August 26, 1993 in Harvey, Illinois, to Sharon and Larry Palmer, Keke was raised in a Christian household. She has a brother Lawrence and two sisters, Lawrencia and Loreal. She moved California with her family to pursue her acting career. 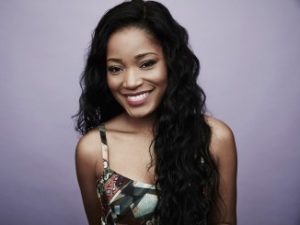 Keke Palmer Facts:
*She was born in Harvey, Illinois and grew up in Robbins, Illinois.
*She was a part of show business since early age.
*She is heavily influenced by the girl group TLC.
*Her favorite actor is William H. Macy.
*Brandy, Aaliyah, Beyoncé Knowles, Ciara, Janet Jackson, Mariah Carey, and Whitney Houston are her musical inspirations.
*She is close friends with Carlysia Levert, daughter of American R&B singer Gerald Levert.
*She is an active philanthropist.
*Visit her official website: www.kekepalmer.com
*Follow her on Twitter, YouTube, Facebook and Instagram.