Yasmine Bleeth is an American former actress, best known by the public for her roles as Caroline Holden in the action drama series Baywatch, and LeeAnn Demerest on the soap opera One Life to Live. She also played Inspector Caitlin Cross on the television police drama Nash Bridges. Born Yasmine Amanda Bleeth on June 14, 1968 in New York City, New York, USA, to Carina and Philip Bleeth, she is of Russian-Jewish and German-Jewish descent on her father’s side, and of Algerian descent on her mother’s side. She has two brothers, Miles and Tristan. She has been married to Paul Cerrito since August 25, 2002. She was previously in a relationship with Matthew Perry. 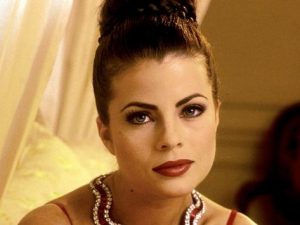 Yasmine Bleeth Facts:
*She was born June 14, 1968 in New York City.
*She was named every year from 1996–2001 in FHM’s 100 Sexiest Women in the World editions.
*People Magazine named her one of the top 50 Most Beautiful People in the World in 1995.
*She once had her own line of swimwear called Yaz Wear.
*She is best friends with Nancy Valen.
*Helen Gallagher is her acting mentor.