Kelli Berglund is an American actress, model, singer and dancer. She is best known for her role as Bree Davenport in the Disney XD series Lab Rats, and its spinoff Lab Rats: Elite Force. In 2014, she starred as Mae Hartley on the Disney Channel Original Movie, How to Build a Better Boy. Born Kelli Michelle Berglund on February 9, 1996 in Moorpark, California, USA, to parents Mark and Michelle Berglund, she has a younger sister named Kirra. She made her television debut in 2006 as a series regular on TLC’s Hip Hop Harry. She has been in a relationship with musician Tyler Wilson. She was previously in a relationship with actor Sterling Beaumon from January 2015 to August 2015. 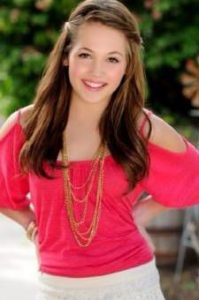 Kelli Berglund Facts:
*She was born on February 9, 1996 in Moorpark, California, USA.
*She began studying ballet and jazz dance as a child.
*In her free time, she enjoys photography and swimming.
*Follow her on Twitter, Facebook and Instagram.