Kelly Brook is a British model, actress and television host. She is best known for her roles as Danni Arslow in the 2010 horror comedy remake Piranha 3D and Prudence in the NBC sitcom One Big Happy. She served as a judge on Britain’s Got Talent and Dirty Dancing: The Time of Your Life. Born Kelly Ann Parsons on November 23, 1979 in Rochester, Kent, England, she is the daughter of Sandra Kelly, a cook, and Kenneth Parsons, a scaffolder. She has a younger brother, Damian, and an older half-sister, Sasha. She began her modeling career at 16 after placing first in a beauty competition. In 2017, she began dating model Jeremy Parisi. She was previously in a relationship with Jason Statham, Billy Zane, and Thom Evans. 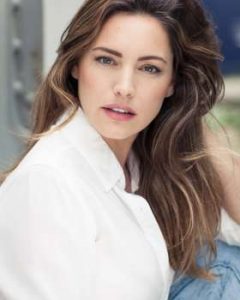 Books: Close Up, Autobiography: My Story, Life Style: How to Pin Down the Pin-Up Within You

Kelly Brook Facts:
*She was born on November 23, 1979 in Rochester, Kent, England, UK.
*Her father died on November 26, 2007, at the age of 57, due to lung cancer.
*She was named FHM’s Sexiest Woman In The World in 2005.
*She appeared in the American edition of Playboy magazine in September 2010.
*She was once engaged to David McIntosh.
*She has her own line of swimwear with New Look.
*Visit her official website: www.kellybrook.com
*Follow her on Twitter, Facebook and Instagram.