Born as Kelly Lee Osbourne in Westminster, London, England, Kelly is the daughter of Sharon Osbourne and heavy-metal musician, Ozzy Osbourne, and has an elder sister, Aimee, and a younger brother, Jack. Singer, actress, fashion icon and television personality Kelly Osbourne is best known for co-hosting E!’s Fashion Police, where she was a presenter from 2010 to 2015. She is also known for her appearances on The Osbournes with her family, for which they won a 2002 Emmy Award for Outstanding Reality Program. Her films include GOD Bless Ozzy Osbourne, Punk’s Not Dead, and Live Freaky! Die Freaky!. 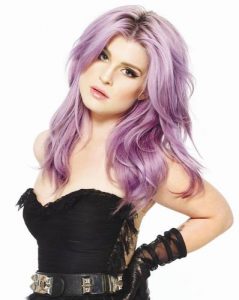 Relationships / Affairs / Boyfriend:
She was previously in a relationship with vegan chef Matthew Mosshart from 2011 to 2014.
In 2002, during the second season of The Osbournes, Kelly dated Bert McCracken, lead singer of rock band, The Used.

Kelly Osbourne Education:
She was dropped out of the 10th grade.

Kelly Osbourne Facts:
*Kelly loves to collect paintings of old movie stars, in particular, Marilyn Monroe.
*In 2002, Kelly was dropped from the record label Epic Records after the release of her debut album “Shut Up”.
*She placed third on Dancing With The Stars.
*Her family adopted Robert Marcato, when his mother died.
*She is good friends with Lindsay Lohan.
*She is a big fan of Blondie/Debbie Harry and Pat Benatar.
*Website: www.kellyosbourne.com
*Follow her on Twitter, Facebook, Myspace, and Instagram.