Keo Motsepe is a South African professional dancer, best known for his appearances as a professional dancer on the ABC dance competition television series Dancing With The Stars. In 2012 he joined the cast of Burn the Floor. Born on November 24, 1989 in Pretoria, Gauteng Province, South Africa, he was raised in nearby Johannesburg with two sisters. Motsepe started his dancing career at the age of 11, by entering into in a competitive dance scene representing his country. 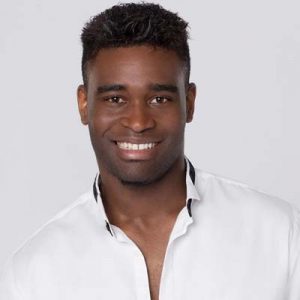 Keo Motsepe Facts:
*He was born on November 24, 1989 in Pretoria, Gauteng Province, South Africa.
*Started dancing when he was 11 years old.
*His dancing styles are Latin and Ballroom.
*He joined the cast of Burn the Floor in 2012.
*He made his first TV appearance on Strictly Come Dancing South Africa in 2013.
*He joined the cast of pro dancers on Dancing with the Stars in 2014.
*He is the first black professional dancer on the ABC show Dancing with the Stars.
*Follow him on Twitter, Facebook and Instagram.