Kesha Rose Sebert, widely known as Ke$ha, is an American singer-songwriter best known for her debut single “Tik Tok,” which stands as the second best-selling digital single in history. She has also released such hits as “Die Young,” and “We R Who We R.” 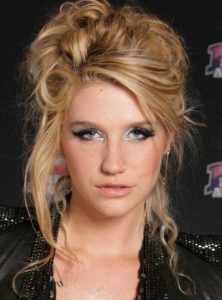 Kesha Education:
She attended Franklin High School and Brentwood High School.
She dropped out of high school at seventeen after being convinced by Music producers Dr Luke and Max Martin.

Kesha Facts:
*She was raised by a single mother.
*She doesn’t know who her dad is.
*She ranked #56 in the 2010 Maxim list of “Hot 100 Women”.
*Her family was featured on The Simple Life (2003).
*She has a dog named Bakon.
*She is allergic to mangoes.
*She worked as a waitress while furthering her Music career.
*She has played saxophone, and trumpet while in the school marching band.
*She loves and respects animals. She is a vegetarian, only wears fake fur, and is one of Humane Society International’s ambassadors.
*Follow her on Twitter, Facebook, Myspace, Google+, YouTube, and Instagram.