Kevin Garnett is an American former professional basketball player. He is regarded one of the most versatile and dominant players of his time. He played for 21 seasons in the National Basketball Association. He played the power forward and center positions. He helped lead the Celtics to an NBA title in 2008. Born Kevin Maurice Garnett in Mauldin, South Carolina, he is the son of Shirley Garnett. He was raised by his mother along with two sisters: Sonya and Ashley. He has been married to Brandi Padilla since 2004. Together they have one daughter, Capri Garnett. 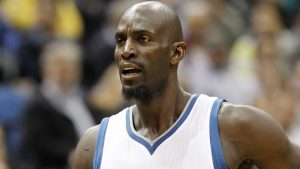 Kevin Garnett Facts:
*He was raised by his mother along with his two sisters.
*In 2008, he was named NBA Defensive Player of the Year.
*He didn’t play college basketball, went directly from high school to the NBA.
*He has a tattoo of his initials, “K.G.”, and another of an arm holding a basketball with the words “Blood, Sweat and Tears.”
*Follow him on Twitter, Facebook and Instagram.