Kiari Cephus is an American rapper, singer and songwriter. He is best known as a member of the rap trio Migos who are best known for their single “Versace.” He is known by his stage name Offset. He joined Kirshnik Ball, AKA Takeoff, and Quavo Marshall, AKA Quavo, in 2009 to form Migos. Apart from Migos, Offset has released solo music and collaborated with numerous artists. Born Kiari Kendrell Cephus on 14 December 1991, in Lawrenceville, Georgia, he was raised in Gwinnett County. He formed Migos with Quavo and Takeoff in 2009. Quavo is Takeoff’s uncle, and Offset is Quavo’s cousin. He became engaged to rapper Cardi B in October 2017. He is the father of two sons, Jordan and Kody, and a daughter Kalea Marie. 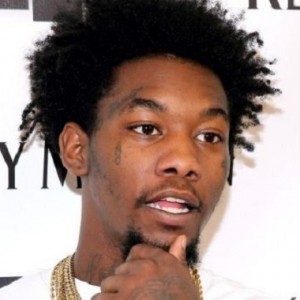 Kiari Cephus Facts:
*He was born on 14 December 1991, in Lawrenceville, Georgia.
*Famous for being part of the hip-hop trio Migos.
*In March 2016, he was arrested for driving with a suspended license but was released the next day without having charges filed.
*Follow him on Twitter, Facebook and Instagram.