Singer-songwriter and rapper Kid Rock Biography, Family, Career, Height, Weight, Age, Measurements will be discussed here. Kid Rock personal details can be checked here. He began his professional music career as a member of the hip hop music group the Beast Crew in the late 1980s.

Kid Rock is an American singer, songwriter and rapper who started his music career as a rapper and DJ, releasing his debut album Grits Sandwiches for Breakfast on Jive Records. He has made songs with parts of many different styles of music, including rock, hip hop, country, and heavy metal. His fourth studio album, Devil Without a Cause, released on August 18, 1998, was a major commercial success. Spurred by the popularity of the single “Bawitdaba”, the album sold 15 million copies, and was certified diamond. The album also received critical acclaim for its genre-mixing sound. With a running time of 71 minutes and 12 seconds, Devil Without a Cause is Kid Rock’s longest album to date.

Born Robert James Ritchie on January 17, 1971 in Romeo, Michigan, to parents Susan and William Bill Ritchie, Kid Rock became interested in hip hop in the 1980s, joining a breakdance crew and teaching himself to rap and DJ. His younger sister, Jill Ritchie, is an actress. 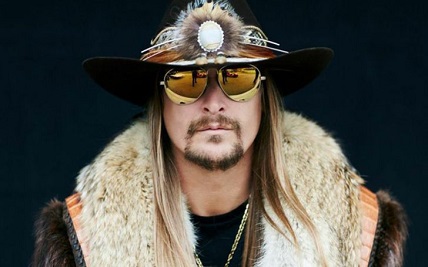 He was married to Canadian-American actress Pamela Anderson from August 3, 2006 to February 1, 2007. He had a son, Robert James Ritchie Jr. with Kelly Russell.

Kid Rock Facts:
*He was born on January 17, 1971 in Romeo, Michigan, USA.
*His father, William Ritchie, owned multiple car dealerships, and was raised in his father’s 5,628-square-foot (522.9 m2) home on a 6-acre (2.4-hectare) property.
*He released his debut studio album Grits Sandwiches for Breakfast on November 27, 1990.
*He was named Soundscan’s top-selling solo artist of the 2000s.
*Visit his official website: www.kidrock.com
*Follow him on Twitter, Facebook, YouTube and Instagram.