Kim Basinger is an American actress and former fashion model. She began her acting career on television in 1976. In 1997, she won an Oscar for Best Supporting Actress for her performance as Lynn Bracken in the film L.A. Confidential. Her other notable film roles include Never Say Never Again, The Sentinel, 8 Mile, The Natural, The Nice Guys, The Door in the Floor, Batman, Cellular, and Nine ½ Weeks. Born as Kimila Ann Basinger on December 8, 1953 in Athens, Georgia, USA to Ann Cordell and Donald Wade Basinger, she was raised a Methodist. She belongs to English, German, Swedish, and Scots-Irish descent. She has two sisters, Ashley and Barbara and Skip, and two brothers, James Michael “Mick”. She married Alec Baldwin in 1993, and the couple had a daughter named Ireland in 1995 before getting divorced in 2002. She was previously married to Ron Snyder from 1980 to 1989. 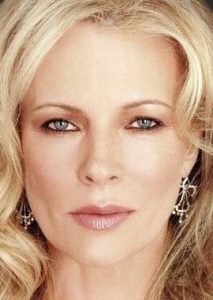 Kim Basinger Facts:
*She is an Academy Award-winning actress and former fashion model.
*She studied ballet for over ten years.
*Became the first actress to win an Oscar after appearing naked in Playboy magazine.
*In 1995, she was placed at #40 in the list of ‘100 Sexiest Stars in film history’ by Empire magazine.
*She was married actor Alec Baldwin from 1993 to 2001.
*Follow her on Twitter.