Marisa Ramirez is an American actress. She is best known for roles such as NYPD Detective Maria Baez in the police procedural drama series Blue Bloods, Gia Campbell in General Hospital, and Carmen Mesta in The Young and the Restless. Her film credits include The Extendables, Itty Bitty Titty Committee and All Souls Day. Born Marisa Maguire Ramirez on September 15, 1977 in Los Angeles, California, she is the daughter of Francine Elaine (Maguire) and Raymond Trinidad Ramirez. She started modeling at the age of thirteen and made her television debut in a 1997 episode of Port Charles. She graduated in 1995 from Ramona Convent Secondary School in Alhambra, CA. She was married to Nathan Lavezoli from 2002 to 2011. She has a daughter named Violet Rae. 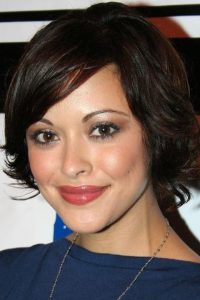 Marisa Ramirez Facts:
*She was born in Los Angeles and raised in Alhambra, California.
*Her father is of Mexican descent.
*Her parents divorced when she was 4.
*She portrayed Melitta in Spartacus: Gods of the Arena.
*Follow her on Twitter and Facebook.