Kim Cattrall is an English-born Canadian actress. She is best known for her portrayal of Samantha Jones on HBO’s Sex and the City, for which she received five Emmy Award nominations and four Golden Globe Award nominations, winning the Golden Globe Award for Best Supporting Actress in 2002. She reprised the role in the films Sex and the City and Sex and the City 2. She has also starred in the films Ticket to Heaven, Police Academy, City Limits, Big Trouble in Little China, Mannequin, Tribute, Porky’s, Turk 182, Baby Geniuses, Masquerade, The Bonfire of the Vanities, Star Trek VI: The Undiscovered Country, Split Second, Above Suspicion, 15 Minutes, Crossroads, Ice Princess, My Boy Jack, The Ghost Writer, Meet Monica Velour, Midnight Crossing, and The Return of the Musketeers. Cattrall’s stage credits include Michael Frayn’s Wild Honey, August Strindberg’s Miss Julie, Shakespeare’s Antony and Cleopatra, Noël Coward’s Private Lives, and Tennessee Williams’ Sweet Bird of Youth. Born Kim Victoria Cattrall on August 21, 1956 in Liverpool, England, to parents Gladys and Dennis Cattrall, her siblings are Lisa, Chris, and Cherry. Following her high school graduation, Cattrall attended the American Academy of Dramatic Arts. She has been married three times and has no children. 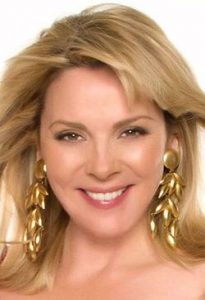 Kim Cattrall Facts:
*She was born on August 21, 1956 in Liverpool, England, UK.
*Her family emigrated to Canada and settled in Courtenay, British Columbia when Cattrall was three months old.
*She made her film debut in Rosebud (1975).
*She played Samantha Jones on HBO’s Sex and the City from 1998 to 2004.
*She was once engaged to Daniel Benzali.
*She holds British, Canadian and American citizenship.
*She is fluent in German.
*She is a huge fan of Rudyard Kipling.
*She is friends with Isabelle Huppert.
*She is an avid supporter of English Fooltball Club, Liverpool F.C.
*Follow her on Twitter, Facebook and Instagram.