Jules Asner is an American screenwriter, author, TV personality, and former model. She is best known for hosting Revealed with Jules Asner, E! News Live and Wild On!. She received a Prism Award as well as a Gracie award for her interview show Revealed with Jules Asner. Born Julie Ann White on February 14, 1968 in Tempe, Arizona, to Lee White, a furniture saleswoman, Asner was discovered at a modeling convention in Scottsdale, Arizona at the age of 16 and became an Elite model. She graduated in 1986 from McClintock High School in Tempe and attended the University of California, Los Angeles (UCLA), graduating with a degree in Political Science. She has been married to Steven Soderbergh since May 10, 2003. She was previously married to Matthew Asner from 1992 to 1996. 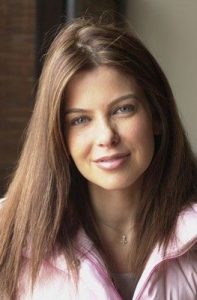 Jules Asner Facts:
*She was born on February 14, 1968 in Tempe, Arizona, USA.
*Her birth name is Julie Ann White.
*She began her career as an Elite model.
*She earned a degree in Political Science at University of California, Los Angeles.
*She published her first novel, Whacked in 2008.
*He has been 5′ 10″ since age 11.