Best known by the public for her roles as Judy Barton in Alfred Hitchcock’s classic thriller Vertigo, as Marjorie “Madge” Owens in the 1955 film Picnic, as Molly in the 1955 film The Man with the Golden Arm, and Moll Flanders in The Amorous Adventures of Moll Flanders. Kim Novak was born Marilyn Pauline Novak on February 13, 1933 in Chicago, Illinois, the daughter of Joseph and Blanche Novak. She belongs to Czech descent. She married Dr. Robert Malloy in March 1976. She was previously married to Richard Johnson. 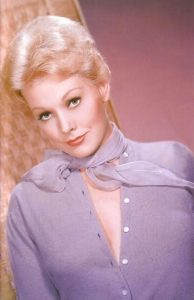 Kim Novak Facts:
*She made her film debut in The French Line.
*She worked as a sales clerk, a dental assistant, and an elevator operator.
*In 1995, she was placed at #92 in the list of ‘100 Sexiest Stars in film history’ by Empire magazine.