Kim Poirier is a Canadian actress, singer, film producer, and television host. She is best known for her starring role as Roxy Hunter in the television series Paradise Falls. She is also known for her roles in the films Decoys, Decoys 2: Alien Seduction, How I Married My High School Crush, Foodland, and Silent But Deadly. Born Kim Jacinthe Poirier on February 6, 1980 in Drummondville, Canada, her mother, Carol Laquerre, was a model and won Miss Toronto in 1976. Kim grew in Toronto, Ontario and has a sister named Alexandra. She debuted on the Sci-Fi show PSI Factor: Chronicles of the Paranormal. Since May 2016, she has been married to Alex Saunders. They have two children. 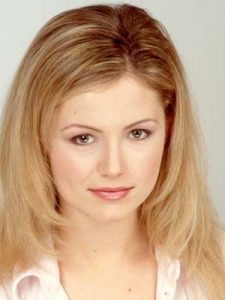 Kim Poirier Facts:
*She was born on February 6, 1980 in Drummondville, Canada.
*She was raised in Toronto, Ontario.
*Her vocal range is E3 to F5.
*She signed up with King Talent Inc. in September 2006.
*She speaks French and English fluently.
*She enjoys watching movies, meditating, writing, jogging, playing guitar, and singing.
*Growing up, her favorite cartoon was Donald Duck and the Last Unicorn.
*Her skills include Firearms Training, Dance, Singing, Martial Arts, Downhill and Water Skiing, Ashtanga Yoga and Kundalini Yoga Teacher.
*She is also the backing singer for the band Jacqui Judge & the Gallows.
*Her favorite books include “The Power of the Now” by Eckert Tolle, H is for Homicide by Sue Grafton, “I am Legend” by Richard Matheson , and “11 Minutes” by Paolo Coelho to name a few.
*Visit her official website: www.kimpoirier.net
*Follow her on Twitter, Facebook and Instagram.