Jane Seymour is a British-American actress. She is best known for her portrayal of Dr. Michaela “Mike” Quinn in the television series ‘Dr. Quinn: Medicine Woman’, and for her performances in the James Bond film Live and Let Die, Somewhere in Time, East of Eden, The Scarlet Pimpernel, Onassis: The Richest Man in the World, War and Remembrance, the French epic La Révolution française and as the ill-fated queen Marie Antoinette; Wedding Crashers. Seymour is the recipient of various accolades including; an Emmy Award and two Golden Globe Awards. She was awarded the Officer of the Order of British Empire (OBE) in the 1999 Queen’s New Years Honours List for her services to drama. Seymour’s first book Guide to Romantic Living was published in 1986. Born Joyce Penelope Wilhelmina Frankenberg on February 15, 1951 in Hayes, United Kingdom, to parents Mieke and John Benjamin Frankenberg, she is the oldest of three daughters. She started with dance training in her childhood and made her professional debut in the London Festival Ballet at the age of 13. She has been married four times and has two children with her former husband, actor James Keach, and two children with her former husband, business manager David Flynn. 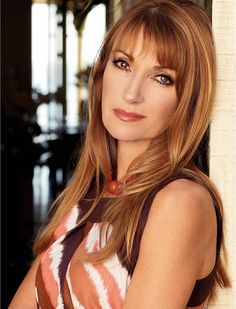 Jane Seymour Facts:
*She was born on February 15, 1951 in Hayes, United Kingdom.
*Her father was a Jew from England whose family was from Poland while her mother was a Dutch Protestant.
*She made her professional debut at the age of 13 with the London Festival Ballet.
*At age 20, she was cast in the James Bond film Live and Let Die.
*She received a Hollywood Walk of Fame star on April 20, 1999.
*She was ranked #10 in the Top 10 Bond Babes list by IGN.
*She was appointed an Officer of the Order of the British Empire (OBE) in 2000.
*She became an American citizen in February 2005.
*In 2010, Seymour founded the Open Hearts Foundation that helps communities in need on a global platform.
*She owns the Jane Seymour Designs, a lifestyle brand inspired by her own personal art and general lifestyle.
*She is good friends with Chad Allen and Shawn Toovey.
*Visit her official website: www.janeseymour.com
*Follow her on Facebook and Instagram.