Kirstie Alley is an American actress. She is best known for her role as Rebecca Howe on the hit sitcom Cheers, for which she received an Emmy Award and a Golden Globe in 1991. From 1997 to 2000, Alley starred in the NBC sitcom Veronica’s Closet. She has also starred in several films, notably Summer School, Shoot to Kill, Look Who’s Talking and its two sequels, Madhouse, Sibling Rivalry (both), Village of the Damned, It Takes Two (both), Deconstructing Harry, For Richer or Poorer (both), and Drop Dead Gorgeous. Alley won her second Emmy Award in 1994 for the television film David’s Mother. In 2010, Alley appeared on the reality show Kirstie Alley’s Big Life and competed on Dancing with the Stars in 2011, finishing in second place. In 2016, Alley joined the second season of the Fox comedy horror series Scream Queens. She placed second on season 22 of the British reality series Celebrity Big Brother. Born Kirstie Louise Alley on January 12, 1951 in Wichita, Kansas, to parents Robert Deal and Lillian Mickie Alley, she has two siblings: Craig Alley and Colette Alley. Alley graduated from Wichita Southeast High School in 1969, and attended college at Kansas State University in Manhattan, Kansas, but dropped out after her sophomore year. She married Parker Stevenson in 1983 and they had two children before divorcing in 1997. She was previously married to Robert Alley. 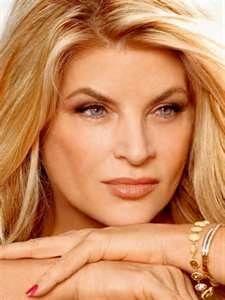 Kirstie Alley Facts:
*She was born on January 12, 1951 in Wichita, Kansas, USA.
*She is of English, German, Scottish and Irish descent.
*She made her feature-film debut in Star Trek II: The Wrath of Khan (1982).
*She played Rebecca Howe on the TV series Cheers.
*She was honored with a star on the Hollywood Walk of Fame at 7000 Hollywood Boulevard.
*She lost over 75 pounds on Jenny Craig, Inc.
*She is a huge fan of Prince and Jamie Foxx.
*She is a huge fan of Star Trek: The Original Series (1966).
*Visit her official website: www.kirstiealley.com
*Follow her on Facebook and Twitter.